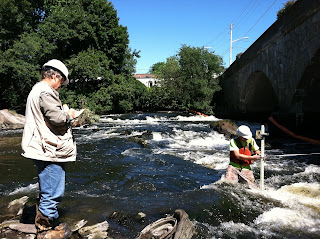 Today Dick Quinn from US Fish & Wildlife was on site, working with Curt Mason of EA Engineers to cut a low-flow channel in the river bed along the south bank of the river. Its purpose is to ensure that even if river flows are unusually low during the spring fish run period, shad and herring will be able to swim upstream over the restored Falls. Flows were relatively low today and we took advantage of low tide in the morning. The first photo shows Dick at work with Arthur, one of the guys from 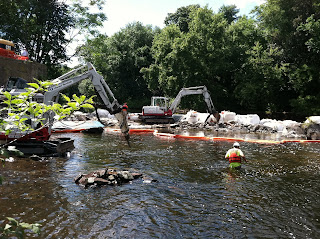 SumCo, to lay out the channel. Later they had two excavators working--one on the channel and one on the dam. Removal of the south spillway is moving slowly due to the mass of concrete that must be removed, and because this spillway, unlike the center section, is crisscrossed with steel reinforcing rods. The second photo shows both machines at work.
Posted by Quahog Jam at 7:07 PM